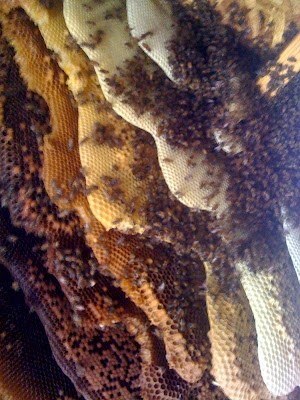 " Here is an example of a large Bee hive containing thousands of bees that was recently removed by SUMMERLIN PEST CONTROL technicians TJ B. and Vic H. This Large hive  measuring approx.  3 ft.high and  4ft. wide was removed from within a homes attic above the bedroom in the Northwest area of Las Vegas. "

People are often amazed to learn just how many species of stinging insects there are – and summer is the time many have a painful introduction to one or more of them.


Some biting insects, of course, transmit diseases, and the public is aware that, for example, mosquitoes spread encephalitis, an inflammation of the brain, as well as the West Nile Virus, Yellow fever, and Dengue fever.


One problem associated with stinging insects is the allergic reaction some people can have, so taking steps to reduce insect populations in home, school and work areas is especially important.

Philip G. Koehler, a noted entomologist, says it is estimated that more than two million people are allergic to stinging insects and that, every year, 500,000 people use hospital emergency rooms after being stung. In a typical year, between 40 and 150 people died from allergic reactions to stings. Reactions often start within a few minutes of being stung.

People sometimes confuse flies and fleas since the name of these two species sounds the same. Flies include sand flies, black flies, stable flies, horse and deer flies. They're all biters and all breed swiftly and in great numbers. Where a problem is noticed, steps should be taken rapidly to get the population. Fleas are mostly associated with pet dogs and cats. Until confronted with fleas many pet owners are unaware of how much effort it requires to rid a home or apartment of an infestation. In addition to eliminating them from the pet, carpeted areas and upholstered furniture has to be thoroughly vacuumed. Cat fleas have been reported to infect humans with plague, Murine typhus, and certain tapeworms.

In most cases involving a flea infestation, the services of a pest management professional is a good investment, especially for moderate to heavy infestations. Historically, fleas were the primarily transmitters of the plague that devastated the population of Europe.

Ticks also spread diseases. Among them are Lyme disease, Rocky Mountain Spotted Fever, Tularemia, and Babesiosis, to name a few. Like fleas, they can gain access to home environments via pets, but also can exist anywhere else on one's property.

Most stings in the United States are from Yellow Jackets, bees, wasps and hornets. Yellow jackets thrive in New Jersey, often building their nests under the eaves of homes. They are extremely aggressive and anyone who has ever been stung by one knows it is very painful. Getting one's home inspected and ridding it of a nest is far less costly and painful than a trip to the hospital. As many as 10,000 to 50,000 Yellow jackets can live in one nest.

Stirring up a hornet's nest is not just an idle phrase. These are very social insects. Control involves killing the entire colony and is a job that only a professional should undertake because it requires the proper clothing and other protective gear, as well as the right pesticide to do a thorough job.

As beneficial as bees are, their sting is quite painful because they leave the stinger, a venom sack, and muscle to keep pumping the venom in the skin. A typical bee colony can have from 20,000 to 80,000 members. The troubling reduction in the nation's bee population is being researched, but it likely due to natural causes. Calling in a professional beekeeper is the preferred method of moving a nest away from a home or other structure. Pest management professionals, if given the choice, would like to see bees thrive because of their essential role in pollination.

Avoiding insect stings is the best choice no matter what the species may be. We tend to forget that an insect sting can carry with it some very unpleasant consequences. That's why pest control is the first line of defense against disease.
The author, Leonard Douglen, is the executive director of the New Jersey Pest Management Association.
Posted by Summerlin Pest Control at 1:46 PM No comments:

Summerlin Pest Control
**SUMMERLIN PEST CONTROL(Las Vegas pest control) services homes and businesses throughout LAS VEGAS,SUMMERLIN,BOULDER CITY,HENDERSON AND MORE.** "After having worked several years in this field; my top priority and reason for creating this company, is to ensure the utilization of treatments that are safe around your pets and your children...While effectively eliminating all my customers pest concerns!" We believe in hitting problem areas hard and providing customized plans that are as attractive as our service.

Subtle identification differences can help you predict behavior If you have been stung by a bee, hornet or wasp, you can be certain that it was a female! In this group of insects, the aculeate Hymenoptera, only females possess a stinger - whose primary function is to inject venom. The stinger is a modified egg-laying apparatus, called an ovipositor, which is attached to poison glands. In aculeate Hymenoptera, eggs emerge from the base of the ovipositor rather than passing through it. Many other hymenopterans have a piercing ovipositor, but do not sting humans. Sawflies and most parasitic wasps have ovipositors that are used only to lay eggs. Stinging incidents occur because hymenopterans are actively defending their nests or themselves. The majority of stings are more likely attributable to wasps and hornets than to honey bees. Each female wasp and hornet can sting numerous times. On the other hand, a female honey bee is capable of stinging only once because her barbed stinger imbeds in the victim. Other types of bees (bumble bees, sweat bees, carpenter bees, etc.), however, have a relatively smooth stinger, and each female can sting numerous times.

There are more species of bees buzzing around the globe than there are species of mammals and birds combined, a new census shows. This new count of bee species, conducted by John S. Ascher of the American Museum of Natural History in New York, comes from a list he compiled of more than 19,200 described bee species. "Most people know of honey bees and a few bumble bees, but we have documented that there are actually more species of bees than of birds and mammals put together," Ascher said. Cataloguing the world's species, especially small insects, is an enormous challenge; scientists don't even know how many total species live on the planet — estimates run from 5 million to 100 million total species, though only 2 million have been identified. Click here to read the complete article from Yahoo news.